Examples of how dogs are a reflection of us…
And how, if we don’t change, they can’t change. 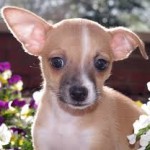 Sue and her Chihuahua, Napoleon, were inseparable.  When her new boyfriend entered the picture, things changed.  Napoleon ran and hid under the bed and would not come out.  He was scared of Mark for no reason.  Even after 2 months of visits, Napoleon would not warm up.  Sue was getting frustrated and feeding into it by giving Napoleon lots of attention for this behavior… and ignoring Mark in the meantime.  Their new relationship was becoming strained.  It was becoming a “me or the dog” situation.  After one session with Beverly, Sue learned to stop feeding into Napoleon’s actions and rewarding them and instead, teach him to come and be with her and Mark.  Mark also learned to not be timid with Napoleon, but rather to be friendly but firm.   Within a few days, Napoleon was eagerly jumping onto Mark’s lap and going for walks with him.  Sue had allowed Mark into their lives and Napoleon loved it.

Patti’s Dachshund, Eddie, was the love of her life.  When Steve and Patti started dating, Eddie would have nothing of it.  He barked at Steve and would not allow him to come near Patti.  After several weeks, Steve had had enough and yet another “it’s me or the dog” situation had arisen.  When Beverly arrived, Eddie would not allow her near Patti, either.  But, when Beverly asked Patti to leave her apartment for a minute, Eddie was immediately fine with her and came right up, took treats, and allowed her to pet him as if they had been friends forever.  Upon Patti’s return, Eddie began barking at her once again.  Beverly explained to Patti that Eddie was merely protecting her.  Patti admitted she didn’t like getting close to others and she was happy that Eddie protected her.  She did not want to “force” Eddie to get along with Steve.  Steve and Patti broke up. 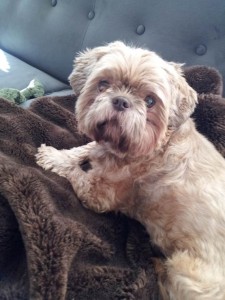 Kelli was trying to lose weight and was drastically changing her eating habits, including denying herself treats and meals out.  She became obsessed with calorie counting. Her dog, Dakota, developed an eating disorder and would not eat.  Kelli tried hand feeding her dog, giving her human food, etc., to no avail.   She finally took her into the Vet, but the doctors couldn’t find anything wrong.  Beverly told Kelli to give her the dog, because Beverly figured Dakota would eat just fine around her.   When Beverly took Dakota for a few days, she ate her kibble every time Beverly offered it with no hesitation.  Beverly explained this to Kelli and, once she admitted to her  own disorder, Dakota began eating for Kelli again.

Jean has always had bad teeth.  She used to have lots of cavities as a child, and she didn’t take good care of her teeth as an adult.  She had 3 root canals and gum surgery in adult years.  She often had nightmares of her teeth falling out.  At just 4 years of age, she noticed her dog’s teeth were loose and bleeding.  She had to make sure she wasn’t dreaming.  Sadly, she wasn’t.  Two surgeries later, her dog was left with just 12 teeth (dogs have 42 teeth).  After learning this lesson, she now regularly brushes her dog’s few remaining teeth and she takes better care of her own dental hygiene.  Her dog, now 9 years old, has no problems with her remaining teeth.

Nancy’s dog, Maggie, bit her and tugged and ripped her clothes every time she tried to leave the house.  Beverly worked with her and Maggie and immediately had success with her being able to leave the room with Maggie sitting calmly.   But, four lessons later, Nancy only had intermittent success on her own.  Beverly finally said to her:  “I gave you all the tools you need, you’ve seen that Maggie can do this, but you’re still struggling.  What is it in YOU that wants her to continue jumping on you and biting you?  It’s about you now, not Maggie.”   She admitted that she doesn’t want to correct her and that she likes someone not wanting her to leave.  So, she has been allowing Maggie to do this to feed her own needs and really didn’t want the behavior to change. 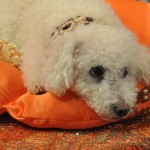 Romanus wrote a movie script and wanted to shoot and direct the film here in SF.  When he started questioning his ability to complete such a big project, his dog Pijo’s leg suddenly became mysteriously hurt and he began limping.  The doctors couldn’t find anything wrong. Romanus was worried that Pijo would not be able to perform, and got even more stressed and doubtful about his ability to complete this huge undertaking.  But, Romanus plugged on, worked with more people on his project and soon got back his energy and drive.  Once he believed in himself and his project again, Pijo’s leg was immediately fine and he never limped again.
(see  http://www.doggieboogiemovie.com  )

Jennifer is a nervous, chatty woman.  Once, she yelled when startled by someone coming around a corner and her dog, Sam, nipped the person.  She came to Beverly for help and they worked together and Sam got better.  Two years later, Jen got startled again and yelled and, again, Sam nipped the person who startled her. This time, they had to go to dangerous dog court.  Now Jen was nervous that Sam was going to bite someone and she was going to lose him.  Sam started lunging at everything around him.  Beverly worked with Jen to get her confidence up.  She showed her that she needed to be a calm, cool leader for Sam, and feel and “know” she was in control.   Once she calmed down and acted confident, Sam stopped lunging at anything and could be startled over and over with no reaction. (Sam got off with just a warning in court after Beverly presented the videos of him ignoring people jumping out at him, and him sitting calmly next to wiggly babies and children with bikes and skateboards whizzing by).

Mary was a shy, withdrawn woman whose pitbull Roger was barking at strangers. When Beverly was with her, Roger would be fine.  But, when alone with Mary, Roger continued to get worse.  Beverly told her she needed to have the confidence that the dog could be OK, but she did not.  She lived in fear that she could not control her dog.  She refused to take the dog out for walks around people or work on his fear of loud noises.  She would get upset when the dog got scared.  She put Roger on medication.   That only helped a small amount.  They took Roger out with another dog and, once again, Roger was fine with the noises and people around him.  So, Beverly suggested that she get another more confident dog to be Roger’s leader, since she could not provide that stability for him.  She tried to help Mary find another dog through rescue groups, and she met several dogs but, in the end, chose not to get another dog.  Roger never improved and she just walks him at night or early morning when no one else is around.

As these stories illustrate, our dogs only improve when we improve.   Once we understand how we are feeding into an issue, it’s usually a simple (but not necessarily easy!) solution to break the pattern.  SF Dog Connect is here to help you figure out what’s holding you and/or your dog back, and get you over the hurdles and on to enjoying all that life has to offer for you and your furry best friend.